Tractor Accidents Result in More Than Half of Agriculture Accidents

Don Beattie is featured in the November 2016 issue of The Iowa Lawyer magazine. This issue proudly honors those who have served and are currently serving in our Armed Forces. 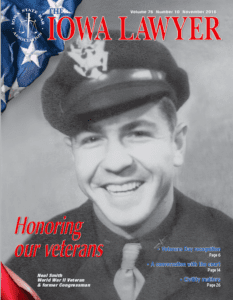 What do piloting a fighter jet and putting together a case for trial have in common? More than you’d think, says attorney and military veteran Donald Beattie.

Beattie practices law in Des Moines and says his experience as a Marine Corps fighter jet pilot taught him the necessary mindset to be successful in the courtroom.

“The Marines never retreat, they always advance,” he explained. “That’s what I do in practice. I never get on the defense and never let anyone bully me or my clients.”

Beattie was nearing the end of his senior year in high school when he got two important letters in the mail in the same week: his service induction notice, part of “Nixon’s lottery,” and his law school acceptance letter from Drake University.

Plans to pursue a law degree would take a four-year hiatus, as Beattie met with recruiters and ended up joining up with the Marines’ flight program. It was October 1970 and Beattie had no previous flight experience. His father, a World War II Seabee, was proud. His mother, he says, “freaked out.”